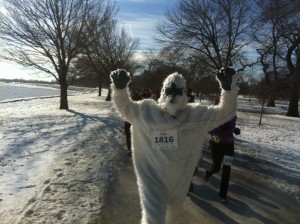 Breakdown: Rarely does a runner need to worry about getting frostbite and a sunburn during the same race, but the sub-freezing temperatures, bright sunshine and the reflective nature of the freshly fallen snow (F^3 race organizers were lucky enough for yesterday to mark the first time in 335 days that the Windy City received at least an inch of snow) succeeded in creating the perfect mix of coldness and brightness to firmly establish conditions for both.

Starting and finishing in Montrose Harbor, the fourth annual F^3 Lake Half Marathon benefited not only from beautiful snow-covered scenery, but also from the spirit of excitement that a well-organized half marathon on the lakefront during the long-distance-race-starved month of January enkindles in the local running community.

F^3 Events, a collaboration between Kimberley Stedman and Universal Sole owner Joel Feinberg, started the Lake Half Marathon in 2010 with around a hundred runners, and only a few years later it has grown into a highly anticipated (the race sold out this year) seasonal event. With the launching of the Burgers & Beer 5K last year and the new partnership with Magellan Development Group on this half, it’s clear that F^3 has a long-term plan for growing their events without overshooting their ability to deliver a high-quality race that maintains their initial grassroots vibe.

Price: $69
Course: Starting and finishing in Montrose Harbor is a Chicago racing standard but covered in snow, this starting/finishing line felt entirely new. An open lakefront trail can sometimes feel crowded, especially when you’re covering more than thirteen miles, but on a chilly day like today crowding from non-participants is not much of an issue.
Organization (gear check, etc.): Handling a sold-out field of 2,000 runners, the starting line and first few miles of the course felt a little crowded, though not prohibitively so. Packet pick-up was not provided on the day of the race, which can be a bit of a downer, but there were plenty of opportunities for packet pick-up in the week leading up to the race. The small base camp featured a number of high-profile vendors and was easy to navigate.
Goodie Bag (includes shirt): Just a shirt and a bib for the race. The shirt is nice but not overly impressive.
Weather: Though it was only around eighteen degrees, the lack of strong wind and the bright sunlight made it feel much warmer. (Zach Freeman)

[…] you are into fresh cold air hitting your body as you run against the wind. Then the fourth annual F^3 Lake Half Marathon would be right up your alley. Chicago’s crazy weather will have runners running for heat by […]