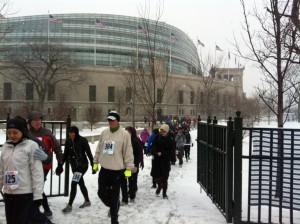 Breakdown: Waking up and checking the weather report this morning, it’s quite possible that a number of runners decided to roll over and go back to sleep. It’s understandable. With the temperature stubbornly stuck at twelve degrees and the sun hiding behind dense cloud cover and heavily falling snow it certainly didn’t seem like ideal race weather. And less than half an hour before the 9am start time for the Chi-Town Big Game 5/10K, the starting line just south of Soldier Field was mostly devoid of runners, despite blaring race music and several volunteers. But in the warm interior of Soldier Field’s United Club, around a thousand runners were bustling with pre-race energy.

Smartly, the race announcer led both 5K and 10K participants out just before their separate go times, allowing for an organized start for each race with as little exposure to the weather as possible. But despite some strong wind and sideways-blowing snow, the open course on the Lakefront Trail was carefully cleared and easy to navigate through the smallish field of runners. A number of water and aid stations were spread throughout the course, staffed by venturesome volunteers. 5K runners turned around just north of 31st street, while 10K participants headed as far south as 41st.

The weather was tough, but organizers prepared well for this with plenty of support on the course and a big post-race party in the United Club. And no one’s complaining about a post-race hotdog and Miller Lite (tickets for each were on race bibs) to get a little pre-game preparation for runners’ various Super Bowl parties.

Price: Waved increases 5K ($40-50), 10K ($50-60)
Course: Waldron Drive, just south of Soldier Field, offers an ideal starting and finishing area for lakefront races and the Chi-Town Big Game 5K/10K took advantage of its accessibility. Mostly taking place on the cleared Lakefront Trail, runners were offered stunning views of the snow-covered Lakefront throughout.
Organization (gear check, etc.): Packet pick-up at Fleet Feet was no problem, but race organizers also offered race-day pick-up. Hosting the post-race party in the United Club made a big difference to the proceedings, giving cold runners a spiffy place to warm up and plenty of space to stretch.
Goodie Bag (includes shirt): A well-designed, if basic, long-sleeve red running shirt and an unexpectedly nice fleece cap with the race logo on it. The bib included tickets for one beverage (either a sixteen-ounce Miller Lite or a hot chocolate) and a hotdog.
Weather: It was pretty tough out there this morning—around twelve degrees with heavily falling snow and hardly any sunshine. (Zach Freeman)

[…]  It’s amazing how much difference a little sunshine can make. Last year this race was a slog through snow, wind and low temperatures. This year, despite the temperature on […]