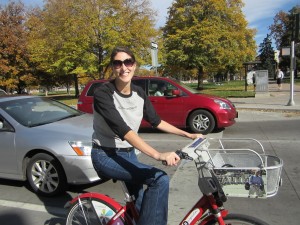 One of the perks of being a sustainable transportation geek is that wherever I travel local planners and advocates are usually happy to give me a tour of their town’s walking, biking and transit hotspots. So when I went to Colorado on vacation last October I asked Aylene McCallum, transportation research manager for the Downtown Denver Partnership, to show me around the Mile High City.

With roughly 620,000 residents (about 2.6 million metro), Denver has its share of big-city challenges. McCallum’s nonprofit works to promote a vibrant, prosperous and environmentally friendly central business district, and smart land use and transportation policies are key pieces of the puzzle.

We meet up at the Downtown Denver offices on the 16th Street pedestrian mall. This car-free zone stretches a mile through the heart of the CBD, served by shuttle buses that run every ninety seconds during rush hours and lunchtime. Flanked by restaurants and bars with sidewalk cafes, the mall itself has plenty of greenery, seating and street musicians—I heard a guy singing Marvin Gaye while accompanying himself on acoustic guitar. Dozens of booths in the median sell trinkets and international cuisine. In food-truck-phobic Chicago, when was the last time you saw a Taste of the Philippines cart?

I ask McCallum why 16th Street, which recently marked its thirtieth car-free year, is flourishing while so many pedestrian malls, including the one on Chicago’s State Street, have failed. “The 16th Street mall is definitely an anomaly but we’ve worked really hard at making it work and we continue to seek ways to improve it,” she says. Currently in Chicago, DePaul University wants to shut down Kenmore Avenue between Fullerton and Belden Avenues to create a pedestrian plaza, but the plan faces opposition from neighbors who are upset about losing parking spaces.

Since the 16th Street shuttle is so popular, and Denver will be getting new light rail lines in the near future, the city plans to launch a downtown circulator bus along 18th and 19th, to take commuters from the trains to their jobs up and down the spine of the city. These new routes are part of FasTracks, a $6.5 billion transportation plan, bankrolled by a 0.4 percent sales-tax increase, including ninety miles of commuter rail, ten miles of light rail, and eighteen miles of bus rapid transit. The cash will also go toward enhancements to Denver’s Union Station, transforming it into a regional transit hub. A modest sales-tax or, preferably, gas-tax increase, would be a great way to fund transit in Chicago, where we recently suffered CTA fare hikes and service cuts.

We walk over to a kiosk for Denver B-cycle, one of the first modern bike share programs in the U.S., with about fifty-five rental kiosks. Chicago is getting a 400-kiosk, 4,000-bike system, slated to launch this spring. “Using B-cycle gives you a little exercise and a little oomph during the middle of your day,” McCallum says. The bike-share system has been a factor in downtown Denver achieving an impressive bike-mode share in recent years. “And over half of downtown Denver commuters are using some kind of alternative transportation to get to work,” she adds. “The drive-alone rate is only about forty percent.”

After checking out a couple of the clunky-but-comfy cycles, we take a spin on downtown streets, where traffic is mellow compared to the Loop. It’s right before the presidential election, and a booth is set up in a median to allow people to vote from their cars—or their bicycle seats. We ride on Denver’s first buffered and protected bike lanes and pass the city’s first dedicated bike traffic signal. “We’re still getting comfortable [with innovative bike facilities],” McCallum says. “Most of this stuff is still in a pilot stage.”

We pedal a few blocks northwest to Union Station to check out the rehab, a massive construction project. “A lot of development is going on downtown now because everybody wants to be where Denver Union Station is,” McCallum says. “Once it’s built-out there are going to be something like 100,000 commuters here every day.”

As we stand on the bridge gazing at the skyline under a cloudless sky I ask if all these active transportation options have something to do with Denver’s statistically low obesity rate. “I’ll tell you what it is,” she replies. “There’s an affliction that everyone that lives in Colorado has. It’s called Colorado guilt. You feel really bad for not going outside and doing something when it’s really nice and sunny, which it is 300 days a year.” That’s one affliction Chicagoans would be happy to have.

We ride the 16th Street shuttle back southeast toward Civic Center Station, the local transit hub, sort of like a train station for buses. “It seems like transportation is pretty great here,” I say as we relax on the comfortable, spotless shuttle. “Are there still challenges or things that are missing?” “Oh, I want more and more and more,” she answers. “We want more bike lanes, better bus service and more frequent light rail. There’s not always enough money or hours in the day to make all this happen but we have grand visions for downtown Denver and a lot of those stand on really great transportation.”

[…] Michigan could be transformed into a transit mall, like Denver’s thriving 16th Street or the vibrant State Street mall in Madison, Wisconsin. Alternately, car access could be retained, […]

If a Car-Free Bryn Mawr Doesn’t Make Sense, How About a Car-Lite One? | Streetsblog Chicago

[…] street. The strip could be closed to cars but open to buses, like Denver’s successful 16th Street transit mall. Or maybe the LSD ramps at Bryn Mawr could be closed some or all of the time to reduce, but not […]