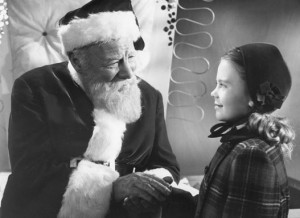 The unforgettable hat, the shining toy train, the pair of ice skates—thanks to cinematic magic, these items have come to represent Christmas joy itself. But don’t just watch them on TV, bring them home for the holidays.

A perennial holiday favorite since this film’s debut in 1947, no one has ever played Santa Claus more convincingly than Edmund Gwenn. And it’s a movie filled with the exciting clamor of Christmas shopping and our yearning for just the right gifts.

Kris Kringle: What do you want for Christmas, Peter?
Peter: A fire engine, just like the big ones only smaller, that has a real hose that squirts real water. I won’t do it in the house, only in the backyard. I promise.
Harried Mother: Psst! Psst! Macy’s ain’t got any. Nobody’s got any.
Kris Kringle: Well, Peter, I can tell you’re a good boy. You’ll get your fire engine.

If in Chicago, Kringle would head to Chicago Fire and Cop Shop. A family-owned store on the Southwest Side run by a retired fire fighter and police officer, they sell a big line of fire-and-police-related gifts, including T-shirts, sweatshirts, hats, Christmas ornaments and toy police cars and fire trucks. 4038 West 111th, Oak Lawn, (708)425-2884, chicagofireandcopshop.com. But to get a fire engine with a working pump, as Peter specified, you must find the Bruder brand, which is sold locally at Target and Toys”R”Us. The Bruder water-spraying truck comes in a range of sizes, and if you want the biggest and best—with a 3.5-foot ladder and eight-ounce on-board reservoir—you’ll find it online at Hammacher Schlemmer (hammacher.com). If you want a true, detailed replica of a real Chicago fire truck, go to Code3FireTrucks.com. These metal, die-cast trucks are more than just toys; they are limited-edition, historic collectibles—for the little boy in our hero-loving grown men.

Another child requests a pair of ice skates from Santa, and it sets the story of the movie into action, because Kris, the store Santa working for Macy’s, dares to tell the mother of this little girl that she’ll find a better pair of skates at the competition, Gimbels.

To get your niece the best skates in Chicago, because as Kris says, “their little ankles want protecting,” visit Triple Toe Skatewear, a store that specializes in ice skating equipment and apparel, at 3028 Hobson Road, Woodridge, (630)964-3863, iceskateschicago.com. Also try Rainbo Sports, one of the oldest and largest retailers of figure-skating equipment in the country. Rainbo even carries their own brand of figure-skating tights, released in 2011 after extensive researching and testing. 1440 Paddock Drive, Northbrook, (847)998-1000, shoprainbo.com. 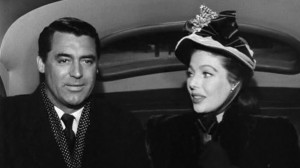 Maybe you can’t have Cary Grant in his angelic charm, but you can get a charming hat like the one he bought for Loretta Young in the 1948 film, “The Bishop’s Wife.” In this timeless Christmas tale, a bishop, played by David Niven, is trying to get a new cathedral built, which depends on the financial support of a domineering and selfish old woman. The bishop prays for divine guidance. An angel (Cary Grant) arrives, but his guidance isn’t about fundraising. It’s more about paying attention to the bishop’s lonely wife and tending to her happiness, which includes the purchase of a hat that she admired in a store window but was too meek to purchase for herself. The hat is purchased and the strained marriage is re-ignited. We are all mere mortals after all, and mortal flesh likes a pretty hat.

To get a life-changing hat in Chicago, visit Goorin Brothers Hat Shop, established 1895, where buying a hat is a personal and special experience. Nestled in among eateries, boutiques, vintage shops, and art galleries, this Wicker Park shop offers hats for men, women and children. 1533 North Milwaukee, (773)384-4287. Or, just a few blocks south, buy a piece of fashion history at Store B Vintage, 1472 North Milwaukee, which carries an eclectic collection of high-end vintage hats, handbags, jewelry and clothing. This is the place to find a hat that might have been worn by a beautiful woman like Loretta Young in 1948. 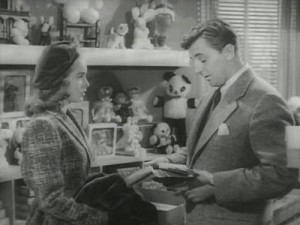 This 1949 romantic comedy stars Janet Leigh and Robert Mitchum. Leigh plays a war-widow with a wistful devotion to her child, an adorable tousled tot who covets an expensive, electric train. Set during the Christmas shopping season, both main characters are working in department store jobs and struggling financially while they fall into a love triangle that involves the buying and returning of the train set—twice. Finally, it is little Timmy who takes his train back to Crowley’s department store and tearfully asks for a refund so that Steve (Mitchum) will not be penniless. The story ends with the child not getting the gift he originally wanted, but instead getting a new father who he loves. If your child already has a father he loves, maybe he could use an electric train set.

The buying of the train sounds like it could be an adventure in itself. Zientek’s Model Trains in Pilsen is a fascinating store situated in an old house where room after room is filled to the rafters with all manner of model trains and related products. For many years it operated as a combination store and tavern, but it seems the bar may now be closed. Still, the selection of merchandise is impressive, and the owner is extremely knowledgeable, friendly and willing to offer sound and honest advice. 2001 West 18th, (312)226-9720. For a more mainstream experience, visit Chicagoland Toys and Hobbies, which sells all the flashy and famous brands in trains, rocketry, RC cars, and more. 6017 North Northwest Highway, (773)775-4848, chicagolandtoysandhobbies.com

And so, an ordinary gift can be transformed with a movie connection; only cinema can engrave on our hearts and make magic of mere objects. It’s more than just another gift: As the immortal Sam Spade once said, it’s “the stuff that dreams are made of.”