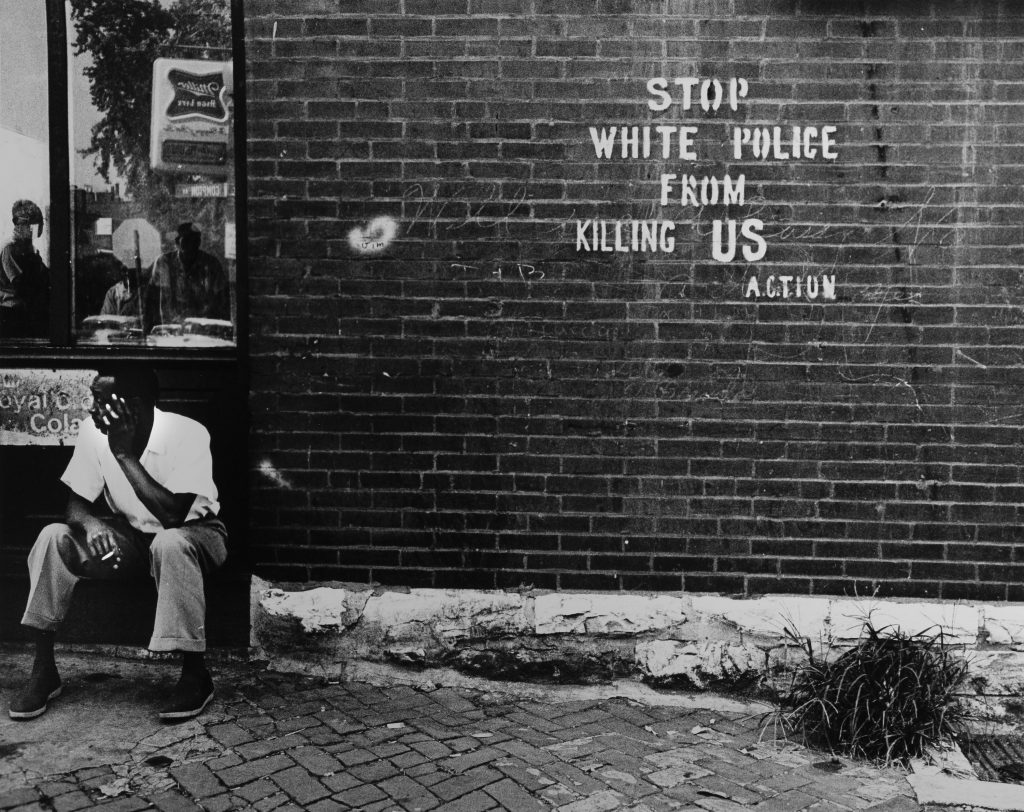 The Block Presents “A Site of Struggle: American Art Against Anti-Black Violence”

The Block Museum of Art at Northwestern presents “A Site of Struggle,” which explores “how artists have engaged with the reality of anti-Black violence and its accompanying challenges of representation in the United States over a hundred-plus-year period. Images of African American suffering and death have constituted an enduring part of the nation’s cultural landscape, and the development of creative counterpoints to these images has been an ongoing concern for American artists. ‘A Site of Struggle’ takes a new approach to looking at the intersection of race, violence and art by investigating the varied strategies American artists have used to grapple with anti-Black violence, ranging from representation to abstraction and from literal to metaphorical. The exhibition focuses on works created between the 1890s and 2013—situating contemporary artistic practice within a longer history of American art and visual culture. It foregrounds African Americans as active shapers of visual culture and highlights how art has been used to protest, process, mourn and memorialize anti-Black violence.” Opens January 26-July 10, 2022. More here.

Occupying all of the museum’s galleries, “Remaking the Exceptional” is organized by DePaul Art Museum staff and is curated by contributing artists Amber Ginsburg and Aaron Hughes. “The Tea Project,” “which informs the development of the exhibition and accompanying publication, is an ongoing series of installations and performances that create opportunities to engage with local and global histories of war, torture and confinement. In the project, tea serves not only as a contradictory metaphor for imperialism and settler colonialism, but also as a ritual of human connection and international solidarity.” More here.

At Input, Jeff Wilser shows “how to build your own pinball machine in 4,761 easy steps,” with a look “inside the incredibly complicated, utterly obsessive, potentially lucrative world of homebrew pinball.” He starts his survey in the suburbs: “Pinball is clearly bumping in Schaumburg, Illinois on a late October weekend at the Pinball Expo, a three-day gathering of 4,000 pinball junkies, vendors, and collectors. This year, the thirty-seventh annual expo (back after a one-year break from COVID) is celebrating a new category of games that are reinvigorating the pinball industry: homebrews. These are machines like [Joel] Kaiser’s. They’re offline games in an online world. They’re physical. They’re bizarre. They’re miracles of ingenuity.”

“An absolute rug pull,” reports the Trib. “The dark days of the coronavirus pandemic have arrived for Chicago’s bars and restaurants once again. In a scene reminiscent of a year ago, a winter surge of cases—and the swift arrival of the omicron variant—has led to chaos and closures across Chicago’s hospitality industry, including more than two dozen bars and restaurants that have at least temporarily shuttered in recent days.” Eater Chicago: “Cases in Chicago continued… and the city’s restaurants and bars responded by canceling reservations, booking tests for workers, and scheduling deep cleanings… The closings, coupled with cloudy and chilly conditions in Chicago that have forced diners inside, have created a sense of doubt… As Lula Cafe owner and chef Jason Hammel illustrated in an Instagram story, restaurants are closing again, this time voluntarily, due to the unpredictability… Hammel himself temporarily closed Lula… after workers tested positive.” He “began collecting announcements from other restaurants and bars including Scofflaw, the influential Logan Square cocktail bar, and Stephanie Izard and Boka Restaurant Group’s Little Goat Diner and Cabra in West Loop. Rose Mary in Fulton Market is also closed… to test workers.”

Block Club Chicago: The city will require some businesses, including bars, restaurants, gyms and entertainment venues, to check patrons’ vaccination status starting January 3. “Sam Toia, president of the Illinois Restaurant Association, said his group pushed for ‘as business-friendly mitigations as they could get’ amid the surge since the industry is still in a ‘fragile recovery… Capacity limits would kill the industry’ but vaccine passports would keep businesses in operation, Toia said.”

“The duo behind Peanut Park Trattoria wants to bring an Old World feel back to Chicago’s historic Little Italy,” reports Lisa Futterman at Thrillist. “Dave Bonomi, owner of Coalfire Pizza, and Anthony Fiasche, owner of Tempesta Market and Tempesta Artisan Salumi, leased the corner space at 1359 West Taylor Street that formerly housed Davanti Enoteca, and La Vita before that. ‘Taylor Street needed some fresh air without straying too far from traditional values,’ says Bonomi, a longtime resident of the neighborhood. ‘Gennaro’s, Francesca’s closed, for a time Rosebud and Tuscany were closed, now Taylor street is ready for fresh pasta made by hand, for local, seasonal produce, for Berkshire Duroc pork in a meatball.'”

John Greenfield’s December Newcity cover story on tiki bars in the Midwest gets a further survey from Fooditor. “Following last week’s piece, I got several private comments via email praising what I wrote, like this: ‘You are right that if it is done poorly it can be tacky and veer into overt racism. But in my experience, Chicago’s Tiki scene is just kitsch, plain and simple. [People] will always find something to cry foul about but it is curious that Tiki, of all things, is where they are aiming their ire. Aren’t there bigger fish to fry?’ But I was attacked for it that evening at dinner by someone else in food media. It followed the pattern familiar to me by now, of what happens when you express an opinion of which People do not Approve: you have a single chance to throw yourself on the mercy of the court, and if, due to some deficiency of the soul, you persist in your bad ideas, you are to be blamed for every bad thing that ever was—in short, canceled. At that point it was basically an alley fight with broken bottles…”

” I write to share some bittersweet news. After eight years at the Chicago Humanities Festival, including five as Artistic Director, I am leaving to pursue new opportunities,” writes Alison Cuddy. “I’ve had a great experience at CHF and have relished my time there, curating conversations and performances exploring the issues and ideas shaping our lives and developing the Festival into a truly year-round presenting organization. I’ve also been extremely fortunate to have meaningful collaborations with many of the cultural and civic institutions in Chicago and beyond, and to work with our city’s vibrant creative community more generally. It’s been a tricky business over the past two years, helping an entity built on live events navigate the complexities of a pandemic, one which continues to upend our lives. So…while this moment comes with a mix of emotions, it feels like the right time for a change. I am excited to build on all I’ve done and to keep helping to advance Chicago’s reputation as the cultural powerhouse it truly is.”

“All seventy-seven branches of the Chicago Public Library are now open on Sunday afternoons for the first time in ten years,” reports WTTW. “With the addition of twenty-four libraries this week, all eighty-one libraries are open from 1pm-5pm Sundays. Plans called for the library to hire 177 staff members to add Sunday hours at all branch libraries, officials said.”

“To ensure the health and safety of audiences, artists and staff during the current period of increased COVID-19 transmission, Goodman Theatre suspends live-in-person performances of ‘A Christmas Carol’ through December 24. The decision, which follows a reported COVID-19 exposure within the production company, allows time for proper testing and isolation protocol in accordance with the Chicago Department of Public Health,” the theater announces. “In a first-ever move, the Goodman gives ticket holders to the affected performances the exclusive opportunity to view the 2021 production at home with a five-camera, high-quality video recorded in collaboration with Christiana Tye Productions and Hatfield Post/Production. Patrons holding tickets to affected performances will receive an email with options to reschedule into an upcoming performance (December 26–31); receive a refund; or convert their tickets into a tax-deductible donation.” “It’s been a joy to safely welcome thousands of families back to the Goodman for ‘A Christmas Carol,’ and we continue to prioritize a healthy environment in which all can enjoy the show,” executive director-CEO Roche Schulfer says in a release. “At the same time, it’s a thrill to offer a new way to experience this important Chicago holiday tradition—and in doing so, perhaps even establish a new tradition—after forty-four years. We’re grateful to our partners and cutting-edge technology that allows us to innovate for a new generation of audiences.”

“From ‘Pass Over’ to ‘Bug,’ it’s hard to think of another actor in Chicago who managed to do so much in a terrible theatrical year,” writes Chris Jones Of Namir Smallwood. “As Broadway plays go, Annette Nwandu’s ‘Pass Over’ came with far more import than any play in recent memory. Aside from Bruce Springsteen’s concert show, this was the first Broadway show back following a devastating COVID-19 closure and a movement calling for greater opportunity and representation of Black professionals in the most prominent sector of the American theater. And at the widely acclaimed heart of the play, a high-stakes drama in which two young Black men waited on a street corner in a structure recalling Samuel Beckett’s ‘Waiting for Godot,’ was the Chicago actor, Hyde Park resident and Steppenwolf Theatre ensemble member Namir Smallwood.”

Jackalope Casts “Let The Light In”

Jackalope Theatre Company has announced the cast, production team and a new director of “Enough to Let the Light In” by Paloma Nozicka. Marti Lyons will now direct the world premiere featuring Jyreika Guest and Jackalope company member Liz Sharpe. This production will be the first indoor event at the company’s Broadway Armory stage in nearly two years. Jackalope announces new, earlier performance dates, with preview performances beginning February 24, 2022 with a run through April 3. Tickets and more here.

Axios Chicago surveys changes planned at universities for the moment: “University of Illinois at Urbana-Champaign: Pre- and post-arrival testing, plus holding the first week of the spring semester classes online; Loyola University and the University of Chicago: All eligible students and staff must be boosted; DePaul University: First two weeks of winter quarter courses online; Northwestern University: Boosters for all eligible students and staff and remote classes through January 17.” The Sun-Times: “‘With the omicron variant fueling a rapid rise in COVID-19 cases across Illinois and the nation, and a likely surge in the coming weeks based on the speed of transmissibility, holiday travel and gatherings, we decided to start the spring semester with two weeks of online instruction,’ UIC officials said in an announcement issued to faculty, staff and students.”

The CTA announced that rides will be free aboard CTA trains and buses this New Year’s Eve, a year-end tradition sponsored by a national beer brand that was skipped last year with pandemic restrictions, reports Time Out. “From 10pm on Friday, December 31 until 4am on Saturday, January 1, riders can take advantage of free rides on all CTA trains and buses—no need to tap cards at train station turnstiles or while boarding buses (though a press release notes that riders will not be refunded if they accidentally tap their fare card).”